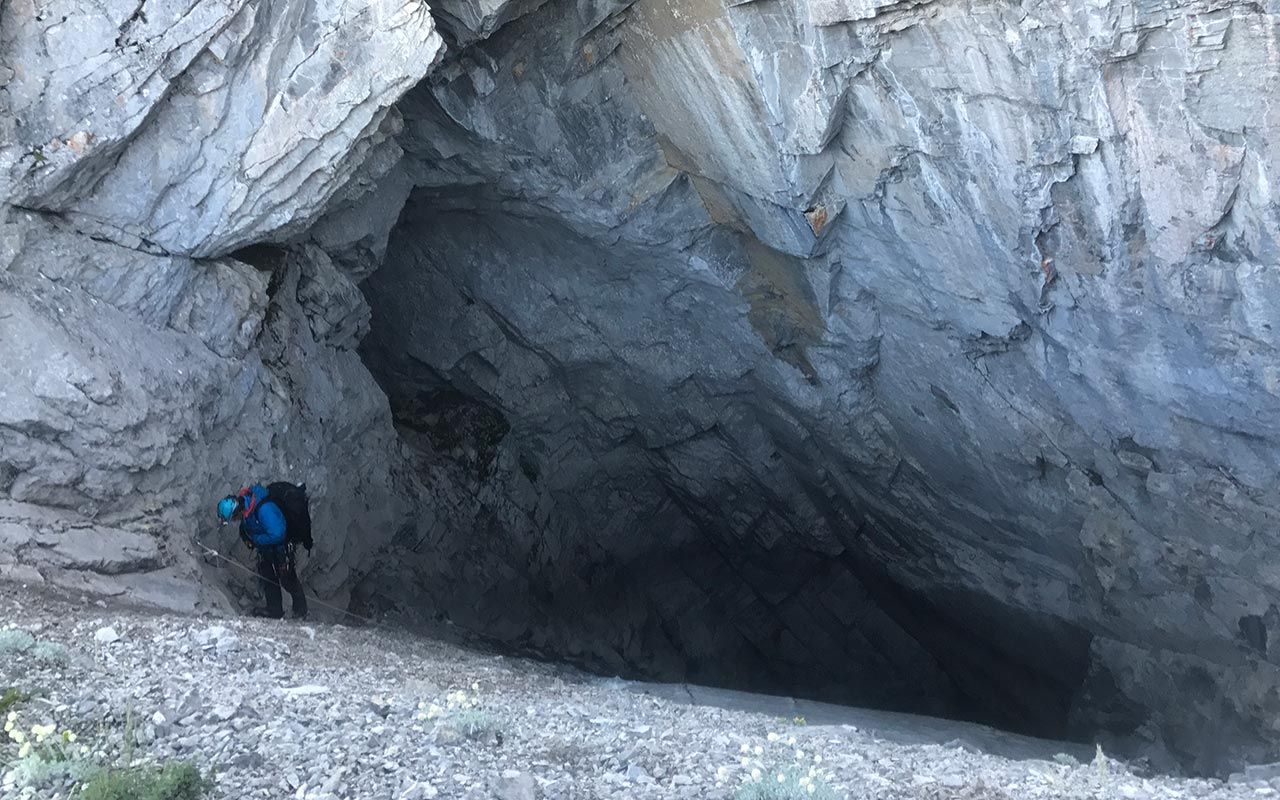 Written by Christian Stenner on 20 July 2017. Posted in Caving Culture

Many Canadian cavers know the work of François-Xavier De Ruydts (Fix), who has photographed caving expeditions for Canadian Geographic, National Geographic, and many other publications.  Fix has moved from still photography into video, and has been working full time on a new video series, Terres d'Exploration. Produced by Magali Gillon-Krizaj, in the series two explorers Damien Briguet and François-Xavier De Ruydts set out to discover the natural history of Canada. They use their unique combination of skills to offer us a fresh look at the natural world and explore the most unusual places.   Now shooting the second season, Fix has gone back to one of his adventure photography standbys for material, caving.  For an upcoming episode in season two, tentatively titled “Grottes: Le monde de l'ombre” or “Caves: The world of shadows” he is focusing on the world of Canada’s caves, and is joining some expeditions to showcase our natural underworld.

Many remember Fix’s epic photos that first illuminated the Booming Ice Chasm, and the subsequent 16x9 TV episode.  It turns out Fix has a special fascination with this cave, and wanted to feature it again in this series.  “It’s such an amazing place.  To have this as a backdrop to the scientific research, it really kills two birds with one stone.” said Fix.  As part of the series Fix interviewed Dr. Ann Cheeptham from Thompson Rivers University about her ongoing microbiology research, and the work of cavers to conduct sample collections for her lab to analyze.  So we mounted an expedition to shoot video in the cave, of cavers conducting sample collections for Dr. Cheeptham.  Due to the amount of video equipment and the projected timeline of three days, Fix arranged a helicopter for transport of equipment and a limited amount of people for the project.

Adam Walker and I were tagged to go.  It was exciting to have a reason to go back, but we were also apprehensive.  We hadn’t been to Booming Ice Chasm for five years, the last time being there with Fix on the Maclean’s photo shoot.  During that expedition we found the current low point of the cave in a side passage, at -178 meters.  Further exploration has been done since, lastly in 2015 when Kathleen Graham completed a bolt climbing lead at the bottom of the main shaft that ended in a dig, (The Canadian Caver N. 81 refers).  and the waterfall ice climbs now explored leading to additional chambers (Journal of Subterranean Metaphysics N. 190).  The map hasn’t yet been updated so we had to ask around for any further exploration objectives.  We decided that there wasn’t anything promising to push and we would have to focus on the filming. We were going to be under a time crunch.  Fix wanted three days to get all the video done, but in the end we could only commit to two.  Fix was understandably worried about the schedule.  “I just want you to know that the price we’ll have to pay for this is very long days.  I hope you are ready for this.”

Fix had scoped out a camping and helicopter landing location on the high ridge south of the summit of Sentry Mountain.  He had seen it on Google Earth but had never been there personally, a patch of green near the top of the ridge. “It’s green so I think it must be somewhat flat”.  This worried me.  Could this trip be sidelined from the start?  We trusted in him and hoped that the magic of Google Earth wouldn’t lie.  On Tuesday, 18 July we met Fix and his team at the helicopter base in Crowsnest Pass.  Joining us would be Nico Borchers and Thibault Delvaux for a total of five persons, plus a mound of film equipment, camping equipment, and of course caving equipment.  Included were enough ropes & ice screws for his team of three and our team of two to each independently rig to the bottom of the main shaft (~500 meters of rope).  The helicopter was on contract for fire duties each day until 2100 hours, giving us a short window to fly and find a landing spot before sunset.

Two short flights brought the five of us and all the equipment to the top of the ridge.  A short distance away was a patch of green meadow, sheltered from the winds at the ridgeline.  We made camp as the sun set, thankful for this perfect spot so close to our objective.  “We deserve this…” joked Adam, referring to our helicopter ride.  “Damn right.” I said, “We’ve hiked lots in our time.”  It was nice to get such a quick trip up to the cave and to strike some of the big unknowns off the list – such as if we were even going to be able to land and where to set up camp.

The next day we went to work.  Dropping 100 meters’ elevation and traversing the cliff face to the entrance from our camp spot would be a thirty-minute trip.  But with filming duties we took three hours, while Fix and his crew captured images of us making our way across the face.  Three hours to traverse a few hundred meters, and not because of the difficulty of the terrain. The phrase of the trip became “Awesome….Now do it again.” as we were reminded of the pleasures of working with video.  Views across the valley were great, though a slight haze from wildfires dulled the colors of the valley.  I could see much of my route of a week and a half earlier when I attempted to solo the Sinister 7, 100-mile ultra-race.  We rigged a hand line through the crux of the cliff face as we knew we would be spending a few days traversing back and forth on this route.

Upon arriving at the cave entrance the first thing that struck me was the lack of snow.  The snow patch at the entrance was much further down the entrance slope, making a larger patch of loose rock and scree potentially there to rain down on cave occupants below.  We had to be careful of this, and the pack rat at the entrance who we worried would have a taste for caving rope.  Rigging down to around the halfway point in the main shaft, we had many opportunities for filming the ice flow and rappelling into the depths of the cave.  The ice, as usual, was incredibly clear and pristine.  Some of the Canmore Caves guides had been on a few trips to Booming earlier in the season, and we are aware of ice climbers and others who have slowly been finding the cave and doing trips.  Word is getting out, but other than frozen over ice screw and crampon marks in typical transition locations the cave was in good condition. After the last round of publicity Fix refused to answer inquiries about the cave location, instead referring them to join the ASS.

Fix’s team had hand crafted some LED lights for illuminating the video shoot.  Wrapped in duct tape and built around a super powerful LED crystal, the units used a large heatsink and fan assembly, and even had an alarm for overheating.  I am looking forward to seeing the final images of the cave lit up. We put in a full day, but not too long, satisfied with the images so far captured.

It turned out that our sheltered spot wasn’t so sheltered after all. Winds picked up in the Crowsnest Pass that night and our tent poles flexed unbelievably as the tent collapsed, the fabric flattened on our heads during gusts and then sprang back upright repeatedly.  I was amazed that the poles didn’t snap, though they were quite bent in the end.

The relentless winds, pressure changes, and dehydration from the day before were all cited as reasons why the entire team suffered from headaches on day two.  With the outside filming already completed we made our way to the cave quickly to commence work underground. On the way we found the traverse hand line had been eaten by rats overnight.  We had de tackled the anchor rope at the cave entrance having anticipated that problem, but had left the traverse rope and other items with our fingers crossed they wouldn’t be touched. The rats had also nibbled on Fix’s backpack stashed at the entrance.

Rigging now to the bottom of the main shaft additional shots were done on the ice slope. Once at the bottom it was time for a rest and look around. Fix’s team knows how to eat on a trip. Salami and cheese was brought out along with fruit, avocados, and the like. The type of thing I always fear would get crushed on a caving trip. I frowned at my chalk tasting protein chocolate brick and ate up all the meat and cheese they offered.

At the bottom the lake was iced over, and some new fauna was noted in the form of three dead animals at bottom – two rats and a raven. I wondered what else could be buried under the snow near the bottom or under the ice in the lake.  A cold trap cave probably works just as well as a trap for unprepared animals and imagined an immense bone bed in the soil just underneath our lunch spot. We filmed the collection of some soil samples and mineral encrustation collections from the cave walls, and content with the results commenced the long climb and derig to get out of the cave.  By now the rigors of the shoot were wearing on us, mostly in the form of calf pain.  With no flat spot to stand we relied heavily on our crampons on slopes which weren’t quite vertical enough.  Eventually we got into an SRT/crampon rhythm with some rest breaks at rebelays as we hauled out the gear.  On every trip in Booming someone drops something, in 2012 I lost my ASS logo toque while climbing out, it slid down with great speed never to be seen again. Amazingly nothing similar happened on this trip and the de-rig was uneventful. We arrived back on the surface in the early evening. With that, the shoot was a wrap, very smooth and ahead of schedule. Fix’s team were great professionals to work with.

We had planned from the start to hike down the mountain separate from the crew, as there was a possible need for Fix’s crew to stay the additional day and get more footage. I warned about the winds, in that the helicopter may not be able to land. 44 km/hr. wind gusts were the forecast down in the pass, I was sure they could only be worse up on the ridge. The tradeoff for us having a helicopter ride up was that we had ~250 m of rope between two of us to carry down the mountain, camping gear, and other things you wouldn’t normally bring to Booming Ice Chasm on a day trip. As well we didn’t have a vehicle staged at the usual trailhead so would have to hike into town all the way to the helicopter base. We bid the film crew adieu and wished them good luck, as they were grappling with the decision to gamble with their one remaining budgeted helicopter flight.

We didn’t have it so bad. The helicopter tried but couldn’t land. Working into the next day Fix’s team spent an additional two trips up and down the mountain to shuttle all of their gear back down.

As I write this Fix’s crew is gearing up to join the August caving expedition to White Rabbit, footage of which is slated to appear in the same episode. Terres d'Exploration should be airing late 2017 and should be available online once the episodes have aired.

Copyright © 2018 Canmore Caverns ltd.
Maintained by This email address is being protected from spambots. You need JavaScript enabled to view it.