How Do Caves Maintain Their Constant Temperatures Year-Round?

There is something a little bit odd - disconcerting even - about standing at the entrance of Rat’s Nest Cave on a cold winter day and feeling warm air pouring out of the cave. That can’t be natural, can it? Caves are supposed to be damp and cold, aren’t they?

How is it that even on the coldest days of the year a dark hole in the side of Grotto Mountain maintains a modicum of warmth while the rest of the countryside succumbs to the long, deep freeze?

Rat’s Nest Cave is not really “warm,” per se. Its roughly 4.5℃ temperature is constant year-round, making it feel rather balmy compared to the frosty temps of winter, but it’s really still the same temperature as your refrigerator. This quality is not unique to Rat’s Nest Cave, but it is a quality that humanity has been exploiting for thousands of years.

Most naturally occurring caves will maintain a relatively constant temperature throughout the year so long as it extends far enough into the rock to escape the influence of the entrance air temperatures. This distance can be as little as 10 meters in some caves so the temperature change can be quite dramatic, as is the case in Rat’s Nest Cave. You probably wouldn’t describe a cave as “cozy”, but it’s easy to see how our early ancestors would find sheltering in caves appealing.

Note: It’s not believed that early inhabitants of the Bow Valley ever lived in Rat’s Nest Cave, but there is ample evidence including pictographs and modified bones to show that it was visited regularly,quite likely in the winter.

Conditions are consisteent throughout the year in Rat's Nest Cave

WHY/HOW Does the Cave Maintain the Same Temperature Year Round?

Why doesn’t the cave’s temperature change daily, or with the seasons like it does outside?

A cave’s temperature is generally equal to the average temperature of the surrounding area, meaning that caves in different parts of the world, at different elevations, will have different temperatures. A cave receives its temperature from a number of “inputs” including air and water flow, as well as direct transmission through the rock walls of the cave, but this is an incredibly slow process.

Rock has a very high thermal mass (this is the rock’s ability to absorb and store heat energy) and it acts like a big blanket the prevents the cave from absorbing or giving away heat. Rat’s Nest Cave is literally inside a mountain, so there is a whole lot of rock between the cave and the outside air. It takes either a lot of temperature difference, a lot of time, or both to influence the temperature of the cave which is why changes in the cave usually occur over hundreds or thousands of years. 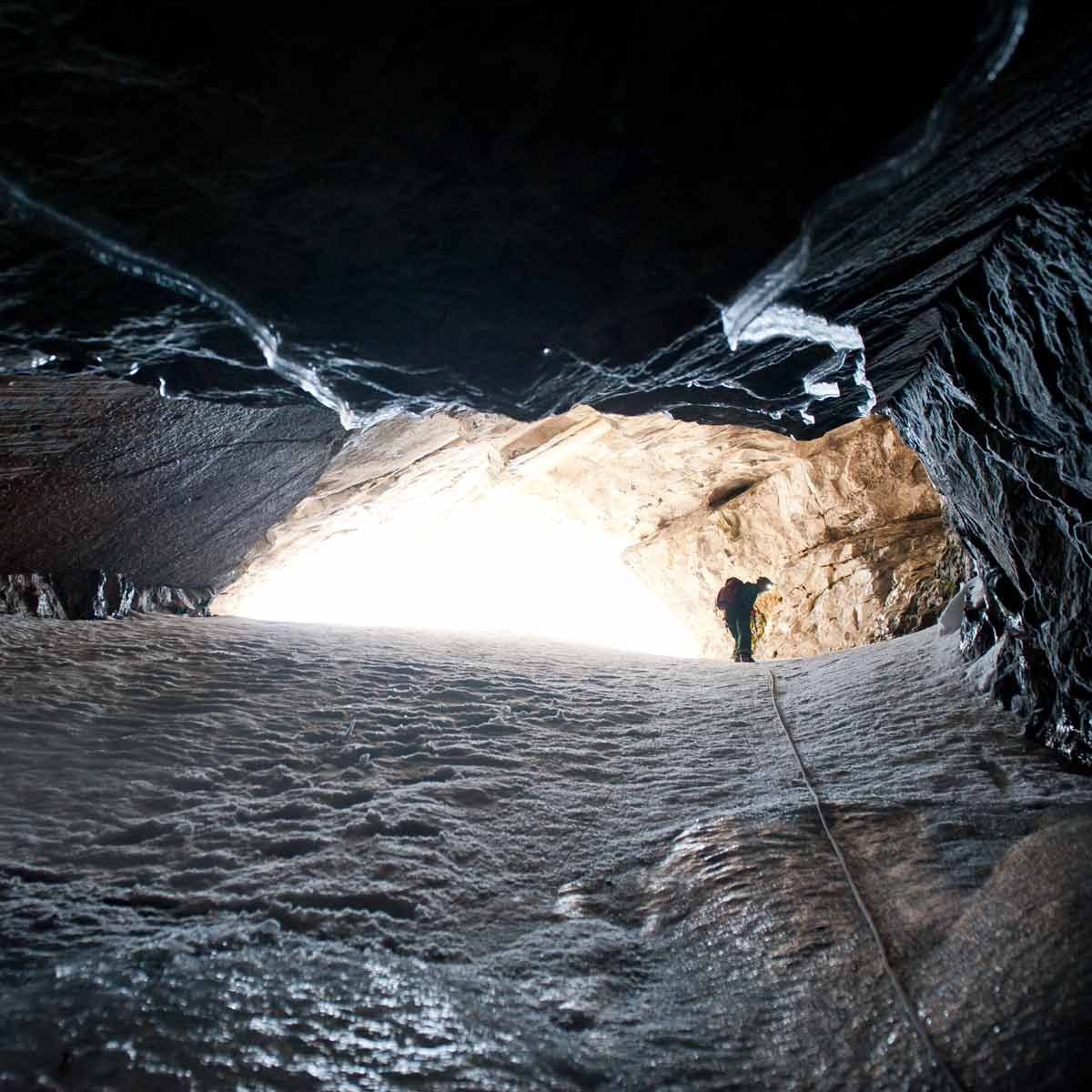 So we say that a cave’s temperature is “generally” based on the average temperature of the surrounding area. Why? Because there’s always a cave that just can’t follow the rules. Actually, there are quite a few of them.

For example, the Booming Ice Chasm, which was originally explored in 2008, is referred to as a cold-trap cave because, due to its position in the mountain, its shape, and its overall circumstances, it traps cold air year-round and maintains a temperature of just below freezing. This is decidedly lower than the surrounding area’s average temperature.

The entrance to the Booming Ice Chasm is situated high up on the side of a mountain and the cave dips steeply down, descending over 170 meters into the mountain. Throughout the winter cold air will sink down into the cave where, unlike Rat’s Nest Cave with it’s many breathing holes, it appears that in the BIC the cold air has nowhere to go. This has resulted in the cave hosting a massive amount of permanent ice year-round, making for some pretty incredible images. When the cave was first discovered stones were tossed into the gaping entrance to get a sense of just how deep the cave was. The “booming” echos the cavers received in reply indicated they hadn’t brought enough rope. 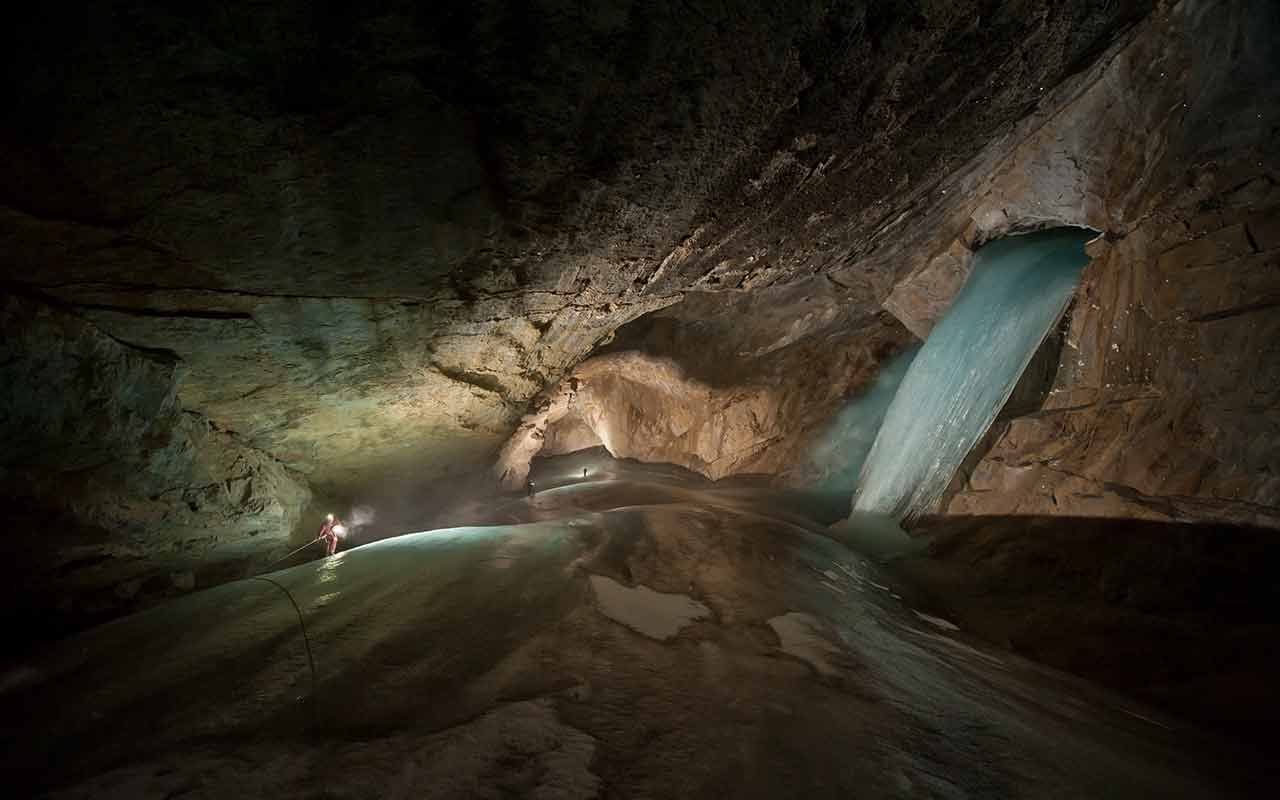 The Booming Ice Chasm in all its glory. FX DeRuydts

Sometimes it can feel colder in some parts of the Rat’s Nest Cave than others. This can be the result of air flow, or “breathing,” that occurs in parts of the cave because of a temperature or pressure difference.

Even though Rat’s Nest Cave only has one known entrance, we are quite confident that there are other smaller holes that allow air to enter or escape and these holes are likely present at different elevations. Cold winter air entering a lower hole might warm and rise through the cave to exit higher up, drawing more air in - while in the summer warm air can cool and sink down through the cave. High and low pressure systems can also influence the flow of air into and out of the cave.

The air flow in some caves, such as Castleguard Cave, is so strong that it is similar to standing in front of a strong air conditioner set to full power.

This predictably slow change in temperature means that caves are an incredible repository of historical temperature data. In theory, if you travel to a part of a cave deep inside a mountain that has minimal air and water flow, the temperature you are feeling could actually be thousands of years old as the cave has not yet adjusted to modern temperatures. 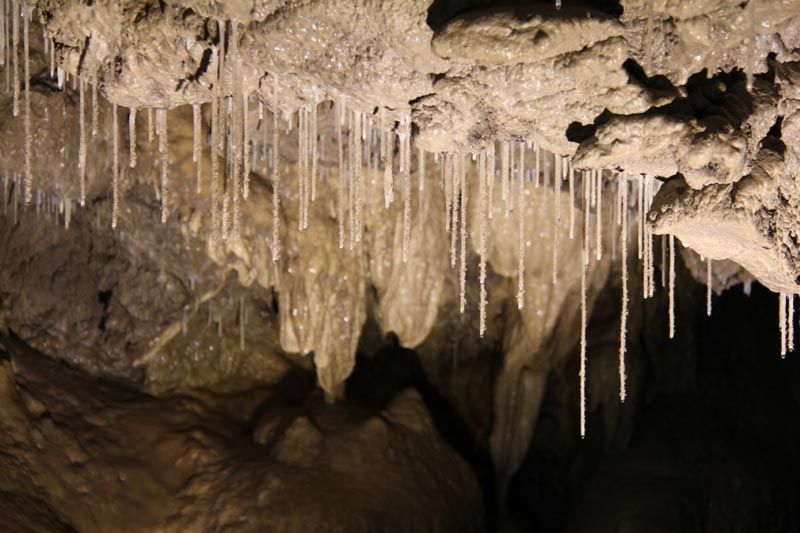 Soda-straw stalactites hanging in the Grotto.

Caves offer even more interesting ways to measure past climate information, and they come in the form of beautiful mineral decorations collectively known as speleothems.

You are most likely familiar with the speleothems known as stalactites and stalagmites. These are two of many types of cave formations created as a result of the mineral calcite being deposited by drip water as it runs down the walls of caves. Stalactites, stalagmites, and all of the other speleothems have become some of the most important sources of climate data in the discussion around climate change due to their global ubiquitousness (caves are everywhere in the world) and their unique ability to store information over long periods of time.

The way these beautiful little formations store information is fascinating, and temperature is just one of the stories that is captured. For example, due to the fact that speleothems form from the flow of water we know that if the surface temperature is cold enough to prevent water from entering the cave these formations will stop growing. We can see these cold events (aka glaciations) in the speleothem record.

As water travels down from the surface and into the cave it is bringing organic chemicals along with it. These organics are trapped in the calcite mineral, and because these organics are only available when plants are growing we can track the seasonal growth of plants. We can even see sun activity oscillations in the deposition of certain chemicals.

The most promising feature of these formations is their propensity for trapping gasses in the minerals during the formation process. Some of the oldest formations in Rats Nest Cave are over 750,000 years old meaning that we have gases trapped in formations that are that old as well. This gives us the ability to directly compare those gases with their modern counterparts, providing insights into those past climates. Enthralling stuff!

Now you know that (most) natural caves maintain their temperatures year round, why that is, and why it’s important. On top of that, you now know that you can explore Rats Nest Cave at a comfortable temperature any day of the year. Why save all the fun for summer? Join us for a tour this winter!