For Canmore Cave Tours, 2019 marks 27 years of adventure – unlocking underground fascination for tens of thousands of guests since our first tour in 1992. While we don’t like to brag, we’re delighted to celebrate this milestone for many reasons. Thanks to the overwhelming support and enthusiasm from YOU, our guests, and our passionate team, we’ve built a reputation of which we’re truly proud.

As of 2018, we’ve been ranked #1 on TripAdvisor’s list of Top Things to Do in Canmore for a total of 5 years, designated as a Canadian Signature Winter Experience by Destination Canada for the last 3 years, and we've won the 2018 Alberta Business Award of Distinction for small businesses.

So we thank you for joining our caving tours and courses, and unEarthed events, for posting your reviews on TripAdvisor, and recommending us to your friends and families – it means the world to us to hear that you have enjoyed your experiences and shared them with others.

As we reflect on 27 years of Canmore Cave Tours, we caught up with Dr Charles “Chas” Yonge PhD, founder and previous owner of the company. To learn about Chas’ inspiration behind the business, highlights of his caving adventures around the world, his current projects, and how he sees his legacy living on today – read on and join us as we head underground with “Professor Cave” himself!

Where It All Began: The Story of “Professor Cave”

An enthusiastic caver for almost 40 years, Chas’ passion for the underground has taken him to caving hotspots across the world, including Bhutan, the Caribbean, Mexico, Canada, the US, Central America, Asia, Australia, New Guinea, and many countries in Europe. Chas’ personal fascination with caves started in 1966 in his native Britain, where he joined the “potholing” club at Surrey University, while studying for an Undergraduate Degree in Physics.

Thinking back to his first caving experience, Chas reveals he was surprisingly apprehensive. “I was a bit worried about how I’d cope with these tight spaces. But they say knowledge conquers fear. And fortune favours the brave,” he grins. “We would go to various places in the
UK, and around Europe, and try to find and explore caves – that’s where it all started.” Among the highlights of his early caving adventures, Chas names a challenging six-month exploration in Papua New Guinea in 1975, funded by the Royal Geographical Society.

“It was a big expedition in quite a remote area. We dropped supplies from a light aircraft and hiked in – it took three days to reach the gear and make a camp. We spent six months collecting samples, writing expedition reports and discovering exciting terrain. I was hooked,” Chas says.

His fascination for subterranean spaces continued to fuel a fruitful academic life. He went on to complete a Masters in Physics at Sheffield University, with a focus on the radiometric dating of rocks, including moon rocks from the Apollo missions – taking his interest in the natural world even further. 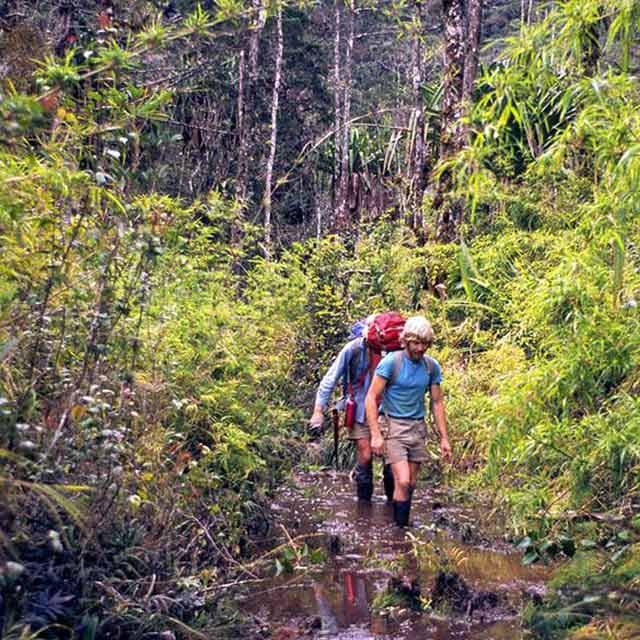 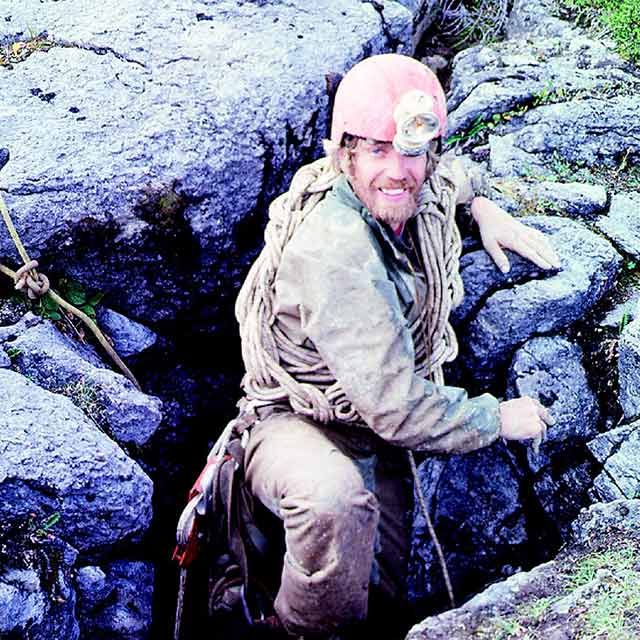 In Search of Discovery: Exploring the Caves of Canada

In 1978, compelled to study caves “as a sort of raison d’etre”, Chas emigrated to Ontario, Canada. Here at McMaster University, he completed a PhD in Geology, focusing on karst climatology – the study of climate change in cave deposits?

“Karst, which includes caves, is formed by the water erosion of rocks, such as limestone. We see huge changes over 300 million years inside caves, so I was looking at samples of ancient water precipitation trapped inside stalagmites and stalactites. One little drop of water can
reveal a lot about the climate of the time. It’s known as karst climate record, and today it’s becoming a hot topic, with this growing focus on climate change worldwide,” Chas says.

Next, Chas’ climatology studies prompted a move to Alberta, where he visited the mountains each weekend to collect and date cave materials. Here, one underground environment left an impression on him, more than any other: Rat’s Nest Cave near Canmore.

Containing more than four kilometers of tunnels and a variety of geological and paleontological features, including stalagmites, stalactites and other deposits, Rat’s Nest Cave is a treasure trove of natural history. Fossilised remains of a variety of creatures have been unearthed from its depths, and discoveries of prehistoric tools, dating from roughly 3,500 years ago, proved an early human presence at the site.

With Chas’ keen personal and academic interest in the site, creating a product was a natural fit.

“It fascinated me not only as a scientist, but as a visitor with a curiosity for the natural world. It’s a tremendous trigger, to dress up and go underground. That’s what people want: the thrill of a unique experience,” Chas reflects.

“I saw the opportunity for an adventurous cave tour, while also interpreting the natural history. And I wanted to live closer to the mountains – so I moved to Canmore and made a go of it.”

The Early Days: Carving Out a Unique Product and Team

Rat’s Nest Cave has been a Provincial Historic Site since 1987, with access to the cave restricted to protect the delicate environment within. As the cave is located within the site of the Grotto Mountain quarry lease, Chas negotiated a private land use agreement as the exclusive tourism operator – and therefore, guardian – of the cave. This agreement permitted the installation of a lockable gate at the entrance – a crucial step to prevent damage to the cave and danger for unwitting explorers.

In 1992, with the backing of two business partners, Chas led the company’s first official wild cave tour for visitors.

“At the beginning, the tours were almost unbelievably primitive – almost like putting my hat out at the end for some coins, then running off to buy groceries for my family,” Chas laughs.

As the business began to grow, Chas recruited a small team of guides, leading a variety of guests from first-time visitors to Canada, to adventurous locals, to military training groups from the British Army. The team also experimented with the tour experience.

“At the start, we would include some interactive experiments for guests, using litmus paper to test the acidity of the water, or measuring the underground temperatures. But we quickly realised that it was the environment itself that really fascinated people. Just being inside the cave and interpreting what we knew about the area – that’s what people were looking for.”

Tweaking the Tours: When One Feature Changes Everything

“We doubled the length of the cave system by extending passages to link them together. But in the early days, the tours lacked a certain flow,” Chas admits. Yet all it took was one structural development, known as “The Box”, to change the Rat’s Nest Cave experience forever.

“One year we had a lot of rain, and a cone-shaped opening formed on the cave floor. We dug through and shored it up, which made it a lot safer and allowed us to link to another passage. It turned out to be the key to our success – it’s the reason that you can follow the whole circuit, without the group creating a bottleneck,” Chas says.

In 2018, The Box continues to be a key feature, with improvements made over the years. “In the beginning it was a smaller, rather primitive construction. You had to worm your way through and it really got your adrenaline going. Now the team has built a more substantial version, sort of like a wooden shaft, and it’s one of the highlights of the tour. As you climb up on the way out, it’s a fun moment when people realise the space is bigger than it looks.” 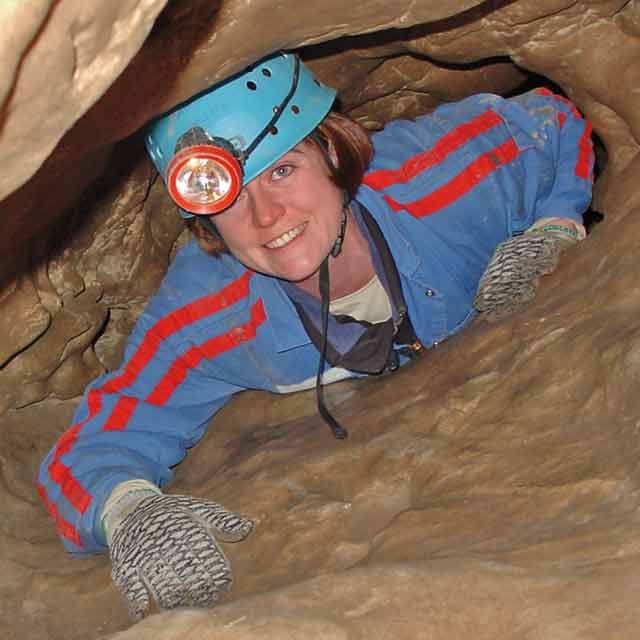 Emerging From the Laundry Chute

Passing on the Legacy: Cave Stewardship and Keepin’ It Wild

Joining the team in 2007 was Adam Walker, an experienced cave guide since 2003 with a Masters in Geology. When Chas started planning for retirement, Adam expressed interest as his successor – purchasing the business in 2013.

“It’s a good way to sell a company, to someone you know. Adam was very competent and had progressed to a senior level in the team, so it was a was a very painless changeover,” Chas says.

While the tours have seen subtle variations over the years, Adam and the team are steadfast in their commitment as stewards of the cave – and Chas is pleased to see that his “mountains without handrails” vision lives on.

“The core products are two interpretive tours with a focus on the natural history and the wild cave experience. So you’re always getting the adrenaline rush and the scientific relevance in one experience,” Chas says.

In 2017, Canmore Cave Tours launched unEarthed, an event series transforming the cave into a unique venue for live music, mindfulness meditation, scientific presentations, and more – 30m (100ft) underground, in the cave’s Grand Gallery. In the same year, the team also launched Solitude, a privately guided adventure custom-designed by guests, limited only by the imagination.

A long-standing member of the Alberta Speleological Society, and volunteer with AB/BC Cave Rescue Service, Adam has been involved in a number of caving expeditions across Canada, the US, the Bahamas, Mexico and Barbados – bringing a wealth of caving experience and passion to Canmore Cave Tours. As of 2018, Adam has grown the team to 15 guides and support staff. “We always paid more than the other local outfitters, so we had good loyalty from our guides,” says Chas, of his time as owner. “Adam continues this approach and is very good to his team.”

A Lifelong Passion: The Adventure Continues

Today, Chas remains an active caver (including some cave diving) in the Canadian Rockies. His recent highlights include exploring marble caves in the Shuswap area of British Columbia (Monashee and Rogers Pass), on multi-day expeditions accessed via helicopter and hiking.

“It’s very rugged terrain out there in the Monashees, like something out of Lord of the Rings. These big marble caves are absolutely superb – they’re a type called striped karst, a lovely banded cosmetic stone. It’s an ongoing exploration, much bigger than we thought – potentially one of the deepest in Canada and the US, once we’ve joined some bits together,” Chas says.

So, we asked Chas, can we expect to see “Professor Cave” underground in years to come? “I still get out there, but the trips are less physical since I’m not that young,” quips the good- humoured 72-year- old.

“I’ll always enjoy the exploration side of it, but I’ve returned more to the science. I’ve always wanted to marry the understanding between academics and cavers. That’s partly the natural history interpretation of the cave – asking questions like: ‘Why are there corrals in the
limestone?’ Or, ‘These are tropical animals, so why are they found in this climate?’”

“I probably could’ve continued with academic life indefinitely, but I’d likely have ended up in cornfield somewhere in the US – so I’m glad I made a go of the business,” Chas jokes. And even after 25 years, Chas feels a special fascination for Rat’s Nest Cave.

“It’s a very interesting site – probably even more interesting than we realise. I think that’s one of the best things about caving, how it provides this great opportunity for discovery. A lot of what we do is original exploration, and that makes caving rather special.”

For his contribution to caving, Chas has been awarded:

His recent work includes the Canadian chapter of the book Ice Caves from Elsevier Press, and a research paper for the British Caving Association sharing an alternative view of how the Banff Hot Springs were formed.